The black locust tree is one of North America’s neglected treasures. Few trees can rival its usefulness, yet in recent decades it appears to have fallen into disuse and obscurity. There was a time that the United States government distributed this tree across the nation, because of its great usefulness. Some sources indicate that Native Americans purposefully spread this tree because of the superior bows which were made from its wood. When I consider all its uses, it’s a wonder to me that more people aren’t growing black locust!

I can think of five main areas in which the black locust tree has proven itself.

The first is that…

The black locust tree is good for the soil.

Not only will it will grow on poor soil, it both improves and conserves the soil. Black locust is a nitrogen fixer. This means that it takes nitrogen from the atmosphere and puts it into the soil through its roots, where other plants can use it, so, having black locust on the edge of a pasture is a means of fertilizing naturally. Additionally, this tree is useful in erosion control. Its roots spread out and hold the soil from washing away. When i was about 14 years old, I helped clear a new baseball field from black locust saplings. Some of those roots were like ropes, running out at least 60′ from the tree! 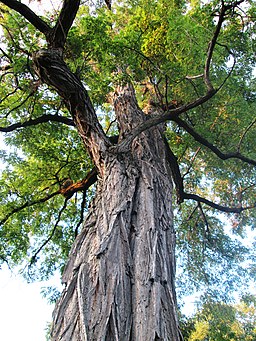 The black locust tree is a natural lightning rod.

It’s true. For some reason this tree actually draws lightning, yet it survives being struck. Where I grew up, in Central NJ, many old farmhouses and barns had large black locust trees planted around them. This was a primitive form of lightning protection. Some of those trees had been struck multiple times. They looked really rough, yet they kept on growing and doing their job.

In many parts of the USA black locust is an extremely abundant honey crop. Black locust honey is clear, almost without color, yet light and sweet. It has a wonderful flavor and is quite popular with consumers. The flowers are showy and the scent… heavenly. Apart from honeysuckle, the fragrance of black locust flowers is one of the fragrances I most remember from spring in NJ. We have black locust in Oklahoma too, just not in such abundance. Indeed, I think I’ve found it growing almost everywhere I’ve traveled in the USA except South Texas and, perhaps Florida. One time, I even found some part way up Pike’s Peak!

Black locust grows faster than many soft woods, yet, unlike most fast growing trees, black locust wood is really hard and durable. Its wood is used for fence posts and rails. Though I’ve seen a living black locust tree with a rot problem, I’ve never seen a piece of cut locust rot. This attests to an old farmer’s saying I heard, as a boy, which went: “When you set a black locust fence post, put a rock on top. When the rock rots, it’ll be time to change out the post.” The wood is very hard, bending a lot of nails when worked and I’ve seen sparks fly when cutting black locust with a chainsaw. Though, I have cut it and will cut it again. Young saplings would make first rate bean poles, as they don’t rot! Want to grow your own fence posts and bean poles? Plant black locust.

Black Locust: The Tree on Which the US Was Built

And it gets even better!

The only other wood I know, which would rival black locust for BTU’s is Bodark (Osage Orange). It makes wonderful firewood, and, as it grows rapidly, is a truly renewable resource. As a seasoned firewood, black locust produces lots of heat, nice coals and burns down to a small amount of ash. The only problem I have with using it as firewood is that there are too many other things I’d like to do with it instead!

I grew up fishing, foraging and gardening with my parents. At age 13 I was introduced to an older man who taught me to hunt and trap. About the same time, our folks signed me and my brothers up for 4-H beekeeping and an older friend of the family mentored me in keeping chickens. When Jerreth and I got married, together we continued exploring and experimenting in the area of producing and preparing our own food.
View My Other Posts

You are here Home » Blog » Black Locust, a Neglected Treasure