Old Friends In The Garden

George wrote another article that brings back a lot of memories for me from Mexico. I was the kid who appropriated some of his seed, mostly because I found some that had a map of Mexico on them and I thought that was so cool. My dad asked me to share his article with you all.

George’s Comments on “Old Friends in the Garden”

I’ve gardened for over 54 years. Some varieties I’ve grown, I’ve grown for more than half that time. For instance, I’ve been growing one tomato for 44 years (though not every year). Why grow something for years and years, instead of changing varieties every little bit? Well, if it’s really good, you might not want to change! That tomato, for instance, has the strongest “tomatoey” flavor of any tomato I’ve ever tried. That’s one good reason to save seed and grow something over and over.

For some reason, growing from the same seed for several years improves succeeding crops.

Some people say that if you save seed and grow the same variety over and over, that it will adapt to your soil and climate, thus producing better. There may be something to that idea, though, I have often thought, that for such a mechanism to work, one would need to grow a good many plants and intelligently select which ones from which to save seed. Yet, when I have saved and grown just a handful of plants a year from my own homegrown seed, I’ve often seen better and “prettier” yields in three years! In fact, thinking about it, I have to conclude that oftentimes everything is better even in the second year!

As I pondered this recently I asked myself, “Is this really adaptation, and if so, just who is adapting? Suddenly it hit me, maybe I’m the one who adapts! By this I mean, I plant the same variety, and I learn its quirks and requirements. I learn how to help it prosper in my given environment. Individual vegetable varieties are often quite unique, even if not too many people write about them.

It takes time to learn the quirks of many varieties.

Take beans, for instance. Most gardeners know that there are two main distinctions in the “bean world.” There are bush beans and pole beans. Bush beans don’t require support. Pole beans do. But did you know that there are numerous variations in the growth habits of both bush and pole beans? Some bush beans reach for the sky, so to speak. They’re fairly tall. A few produce their pods above the foliage. Some carefully hide their pods and make you hunt for them. Some flower and produce for only a couple of weeks. I know of two bush beans which produce indefinitely until conditions force them to stop.

There are numerous variations in growth habit in both pole and bush beans.

Some pole beans only get 3-4’ tall. A few would probably hit 20’ if planted on a wire going up a telephone pole! Some branch and some barely branch at all. Bean plants can vary in the color or tone of their foliage and stems.

There are differing affinities for high or low humidity, hot or cooler temperatures and insect resistance. This is not to mention the varying pod and seed colors, or how they behave at different latitudes due to day length sensitivity.

One interesting bean I’ve grown is called Tarahumara Pink Green Bean. It originated with the Tarahumara Indians in North Central Mexico, which is an arid region. A friend sent me seed when we were living in Hidalgo (South Central Mexico) and I grew it there, at the 20th parallel. It climbed its pole to about 6’ high and produced a respectable crop of green pods, ripening to yield striking pink seeds with black spots. My daughter, Emily, who was a little girl at the time, appropriated that variety as her bean, probably because of the color of the seed and its bright pink flowers,

In 2003 we grew it again, in NJ (at the 40th parallel). It got really tall and it didn’t flower until very late in the year. We grew it in Oklahoma in 2006 and 2009, noting its rampant growth and late, prodigious production of seed. We misplaced our seed and in 2009 I only managed to scrape up two or three to plant. That was on one pole, which, by mid summer, the vines broke with their excessive growth. I put up another pole, which they climbed. I looked the other way… and the vines jumped over to a neighboring tomato planting, smothering four tomato plants in their 5’ cages! That fall we harvested 2 ½ quarts of seed! I planted it in 2013 (the year of the grasshopper plague) and the vines were killed by grasshoppers. Then, something happened. All of my bottled seed stopped germinating. I didn’t know just what I did to it. But it died. We were unable to get any seed to germinate after this.

Sometimes old friends in the garden get lost and need to be recovered.

So, early in 2017 I contacted Native Seeds/Search the organization which first brought this variety into reach of most gardeners. I inquired about Tarahumara Pink Green Bean and was told that they had some seed in frozen storage, but they were not offering any for sale. After chatting for a bit, the young woman in their store decided to take down my information and pass it on to their seed curator, who later contacted me. In the end we agreed that they would send 50 seeds and I would grow it out for seed, returning a healthy portion to them.

Native Seeds Search gave me opportunity to multiply their seed and regain this variety.

I planted this seed on May 22 and have been diligently caring for the plants. It’s was a delight to see my old friend again! I had forgotten that its tendrils are reddish in color, not simply green. The vines are fast growing. By June 26th some of the vines had grown off the top of 8’ poles. I tried to visit this planting, even if only for a few moments, every day, just to watch over it and to make observations.

On July 1 of 2017, I was pulling a few weeds by Tarahumara Pink Green Bean. As I delighted in its vigor and the beauty of its foliage I noticed… the vines had started to throw horizontal tendrils… searching for additional support! One tendril almost spanned a 3 1/2’ space between the beans and… a planting of tomatoes! I thought “You rascal! You’re after my tomatoes again!” Reflecting on this, I realized that I I can’t think of any other pole bean with such a strong tendency to seek support laterally. This is a unique feature of Tarahumara Pink Green Bean. How many years have I grown this bean? Yet it took until this year to notice this trait!

Eventually old friends in the garden can become true heirlooms.

Hope you all enjoy thinking about what’s going in your garden if you are doing one this year. If you have questions, feel free to contact us here or on our Facebook page. 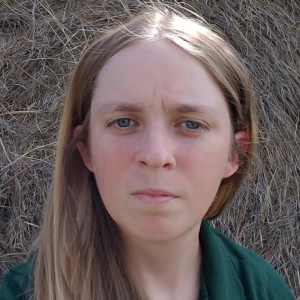 Hi all, I had the wonderful fortune of growing up homesteading from the time I was old enough to sit up and get my hands in the dirt. As I grew up, I saw our ability to provide food for our family, save our family's bacon financially on more than one occasion. I grew up with a passion for the land, a passion for raising animals, and because I grew up on the mission field in Mexico where my family was teaching these same skills to others, I have a passion for teaching others how to provide themselves and their loved ones with food. I look forward to helping you on your journey to being able to feed yourself and your loved ones without having to depend on buying food at the grocery store. - Emily
View My Other Posts

One of the issues that faces homesteaders after we have grown our crops, is how to store them. Particularly root vegetables. So, I wanted to

I am sore, cold, depressed, and sad today. Winter finally showed up at our farm. Rumors of -7 degree temperatures are more realistic than they